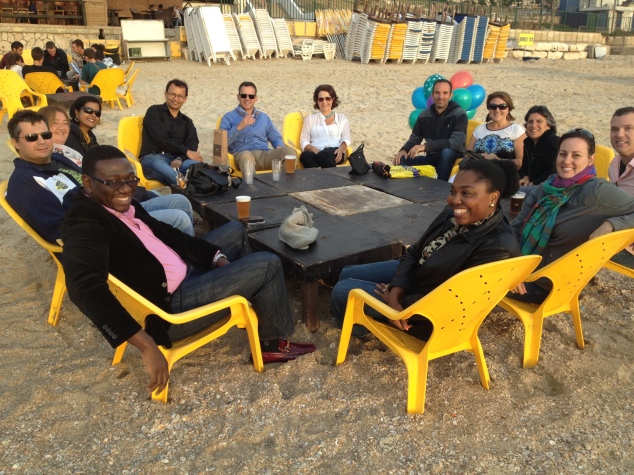 Back up a day earlier …I planned a surprise ” hike” for my husbands 40th birthday present…he is hard (I mean impossible) to shop for and it’s fair to say he is an avid hiker. Best gift …yes, I did good!!  This was a hike he’d been wanting to do BUT since the description of the trail had me *a tiny bit nervous (strenuous, challenging ,50 meters down a cliff , rope necessary ) I decided to send him with a guide… reasonable solution and clear thinking on my part,right?! 🙂

I  happily stayed behind at the Dead Sea while the two of them set off on the trek known as a rite-of-passage hike for Israelis.

Man, they are in good shape! They did the trail FAST in five hours and change (I will admit this kind of annoyed me) I was looking forward to my”alone time” in this beautiful, serene spa and recreation destination… the Dead Sea itself is considered to be the largest natural spa in the world…from what I read the Nahal Dragot can take up to 10 hours…that would have been just about perfect for me!

The Nahal Dragot, commonly known as Darja, is one of the most difficult and extreme hikes in Israel its said to be the ONE trail that puts fear and consternation into even the avid hikers heart.

Located in the mountain range across from the Dead Sea. The hike starts at the top of the mountain and goes down into and through the wadi. At times the trail is just inches wide.

They had to rappel down walls of mountainside that were 15 or 20 meters high, wade and swim through water and  jump from heights of 5 or so meters into said water along with climbing over and under rocks and boulders of all sizes. There are metal hand-holds in sections of  the trail for climbing down nearly blind , across and sideways.

Eric, knowing my ability , felt I would have done fine had I gone. He also expressed that would have been scared and uncomfortable at times…hmmmmm we’ll see if it’s in my future  :O

On my own ,awaiting their safe return I went to the near by Ein Gedi Nature Reserve…a popular spot for tourists

located in the Judean desert, between the stark barren hills and deep canyons that stretch down to the Dead Sea. I hiked the easy lower David Stream.  The trail passes waterfalls and pools, and leads up to the beautiful David waterfall.

A real oasis in the desert. The  Ein Gedi spring is mentioned in the Bible in the Song of Songs 1:14 and in Samuel I 24:1, where the story is told how David fled to Ein Gedi while he was escaping from King Saul.