Christians from around the world pack Manger Square in Bethlehem to celebrate the birth of Jesus in the ancient town where he was born.

getting in is another matter and an adventure all in itself …

The wall was built during a wave of Palestinian suicide bombings in the last decade.

We received courteous treatment by the Israeli soldiers stationed at the checkpoint as we entered in.

On the other side of the security barrier, there was a  massive presence of Palestinian police and security.

Banksy’s art on the separation wall in the West Bank, Palestine

The British street artist  Banksy, who is famous for his graffiti has painted nine images on the Palestinian side. I mentioned interest to our taxi driver and he took a small detour to show me this one.  He also gave me his number and offered a tour to see the rest some time. Palestinians are very proud of the art on their side of the wall

The wall is 26 ft tall in most places, made of concrete with barbed wire on the top and about 500 kilometers long. It’s laced with bold messages of uncertainty and helplessness… they are mostly expressions of disenfranchisement and a cry for hope and freedom and are not considered to be vandalism. 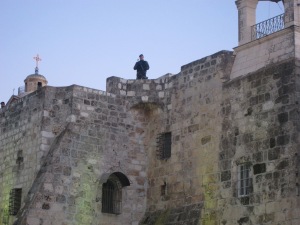 The Church of Nativity is built over a cave which is traditionally believed to be the Manger in which the Virgin Mother Mary gave birth to Jesus.

Inside the church there are steps from two sides lead down to the Grotto and meet at the Altar of the Nativity, the site where Jesus is said to have been born.

“Here Jesus Christ was born to the Virgin Mary” 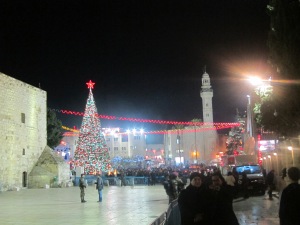 Manger Square as the evening celebrations kick in 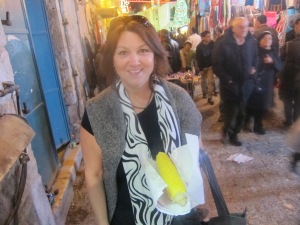 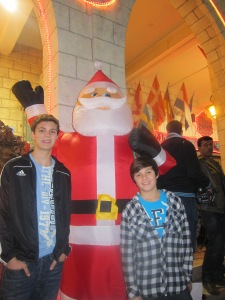 not too old for Santa

Caden on his fourth cotton candy

55-foot Christmas tree outside the Church of the Nativity

a nativity set in a gift shop makes a political statement …I guess the three wise men would have been stopped on their way to see the baby Jesus!